“An expression of intense emotion, stark but always constrained, is the essence of O’Keeffe’s art. And the way she came to this was by the severest form of self-stripping.” James Johnson Sweeney

While known to be fiercely independent, O’Keeffe wasn’t autonomous. As the present Calder work suggests, she and the people she remained close to benefited from creative symbiosis. Along with certain artists, O’Keeffe was close to various Indian tribes/organizations in her area, including the Zuni and Hopi. From a book on the Black Mesa: “The Hopi were told to wander across the new world, leaving markings and ruins along the way. They were to search for the appointed place they would recognize once they had reached it. It would be their center.” Black Mesa, 1973

Georgia O’Keeffe’s cremated remains were scattered over the red hills near her home in Abiquiu, New Mexico, as per her request.

“And it is in so communing that the consciousness comes that one’s self is other than one’s self, is something larger, something almost tangibly universal, since it is en rapport with a wholeness in which one’s separateness is, for the time lost.

Some such consciousness, it seems to me, is active in the mystic and musical drawings of Georgia O’Keeffe. Here are emotional forms quite beyond the reach of conscious design, beyond the grasp of reason—yet strongly appealing to that apparently unanalyzable sensitivity in us through which we feel the grandeur and sublimity of life.” William Murrell Fisher, Camera Work 49/50, 1917 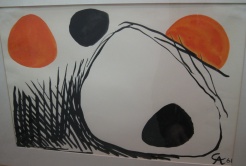