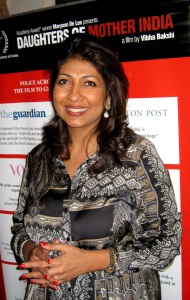 Asia Society and Goldman Sachs 10,000 Women presented a discussion, 11/10, on women’s empowerment followed by a documentary on violence against women and girls in India.

Filmaker Vibha Bakshi was on hand, along with Rachel Vogelstein, senior fellow and director of the Women and Foreign Policy Program at the Council on Foreign Relations (CFR) in Washington, DC; Noa Meyer, global head of the Goldman Sachs 10,000 Women program; and Leigh Gallagher, Assistant Managing Editor at Fortune magazine.

Ms. Bakshi’s film was made in the aftermath of the rape and murder of a 23-year-old medical student in Delhi in December 2012, and the nationwide demonstrations that followed. She hopes to raise consciousness about gender violence, and affect change, especially among law enforcement in India.

At the heart of the matter is the collision of pre-modern and post-modern Indian culture — lacking a shared view (old or new) for how to be healthy persons in society. American feminist interventions will likely make the situation worse, because their mindsets and programs tend to divide women from men.

The men are not the only ones committing violence against women and girls in India. Ms. Bakshi said Indian mothers typically abort their pregnancies when they learn that the fetus is a girl.