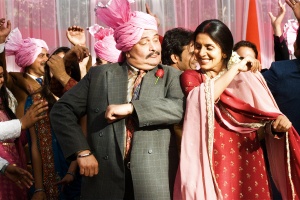 “Do Dooni Chaar” a Walt Disney film made in India, Premiered May 4 at the New York Indian Film Festival.

“Do Dooni Chaar” (2+2=4) is about the middle class Duggal family in Delhi, India trying to get by on just the father’s teaching salary. The wife, son and daughter are eager to embrace the good life, and the family is living beyond their means. The story takes off when the father of one of Mr. Duggal’s students offers him a substantial bribe to inflate his son’s grades.

A Disney executive explained that this film is part of their global strategy to produce family movies around the world for distribution around the world, especially through iTunes and Facebook.

Without giving away the ending, Mr. Faisal said “ordinary people do things the right way.” Coming from a family of teachers and being a teacher himself, Habib Faisal understands the importance of teachers in society and chafes at the lack of respect and compensation given them. Without being judgemental, he said he “wanted to hold up a mirror.” He does so in a way that celebrates the good, while at the same time lampooning human desires that are hijacked by consumerism. “Do Dooni Chaar” was well received at this U.S. Premiere.