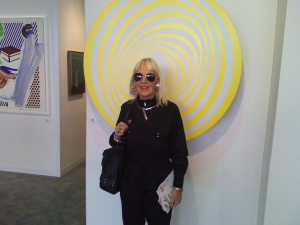 “Because he pursued the destructive urge inherent in Dada to its ultimate conclusion: the destruction of himself.” Hans Ricter

In March the Art World gathers in New York for Armory Arts Week (started in 1913, the current iteration of the Armory Show is now in its twelfth year). This year’s show includes 267 galleries from 31 countries, with a special focus on the Berlin art scene. The hope of organizers is to present the best of Modern Art—Post-Impressionism to the present time.

It seems that society has a duty to support healthy art. And artists, if they are true, to their Creator and their art, have a responsibility to society.

Since the 1913 Armory Show, and the arrival of European Modern Art to America, the effect has been growing disorientation. Dada helped to makie dodos out of vulnerable Americans. Today it’s not uncommon to see animals with more rights than humans.

If art has contributed to the dehumanization of society, hopefully it can be counted on to aid in society’s renewal — starting on the inside.

In the words of Marc Chagall — “All our interior world is reality, and that perhaps, more than our apparent world.”